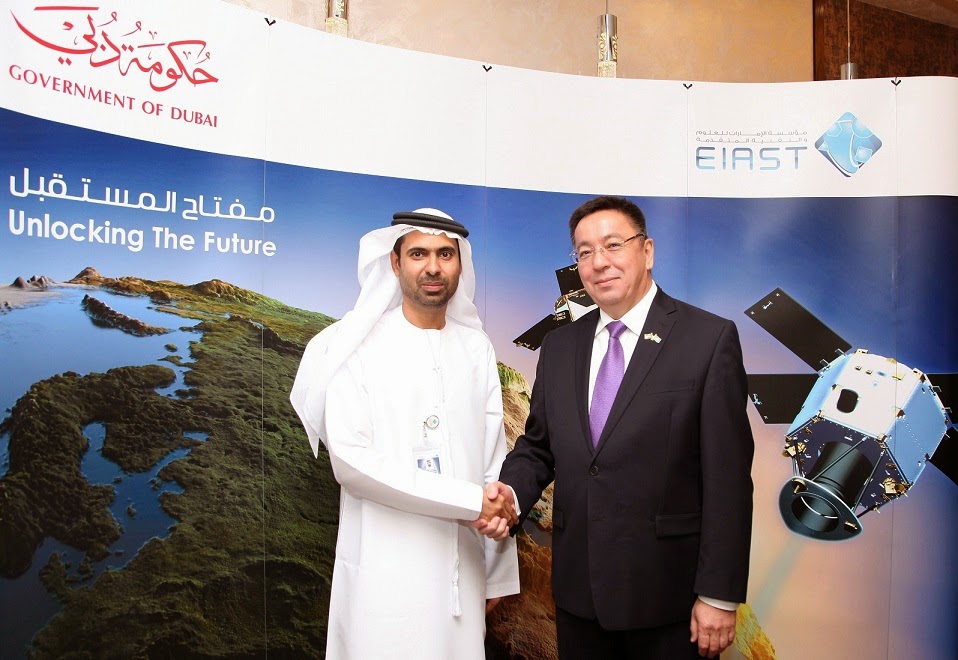 H.E. Yousuf Al Shaibani, Director General, EIAST, said: “We are truly honored to have been visited by H.E. Ambassador Sharif and his group of embassy and consular officials. During their visit, we were able to keep them up to date on EIAST’s milestone achievements and the current work that we are doing, particularly KhalifaSat. The strong ties that we have maintained with Kazakhstan are ably reflected in an MoU that we signed with them in 2011, where both EIAST and Kazakhstan’s National Space Agency have pledged to work together towards developing advancements for the space industry.”
In response to their visit to the EIAST, the Kazakhstan delegation expressed interest in continuously working together with the UAE in the fields of satellite communication and earth remote sensing. The group thanked the EIAST’s warm reception and reaffirmed their commitment to establish cooperation in key areas such as space science, global satellite navigation and use of space infrastructure.
Eng. Salem Al Marri, Assistant Director General for Scientific and Technical Affairs, said: “The visit of the Kazakhstan delegation was an excellent opportunity for us to give them a key tour of our facilities while also updating them on our latest programs and initiatives. Rest assured that as per our mutual agreement with KazCosmos, we will continue to work closely with them and aid them in their space industry endeavors, especially in their satellite projects.”
Ambassador Sharif was joined by Yerzhan Kalekenov, Minister-Counselor of the Embassy of the Republic of Kazakhstan in Abu Dhabi;  Alibek Almabekov, Counselor of the Consulate General of the Republic of Kazakhstan in Dubai and Ibrahim Aushev, Diplomatic Attaché of the Embassy of the Republic of Kazakhstan in Abu Dhabi.
EIAST was established by the Dubai Government in 2006 to encourage scientific innovation and technological progress in Dubai and in the UAE. It also aims to develop the scientific skills and knowledge of Emiratis. It is mainly involved in outer space research and development; satellite manufacturing and systems development; space imaging; and ground station services and support for other satellites.