Skip to content
UAE-UK educational ties got shot in the arm after President’s visit, says British Council at ‘EDUKEX 2013’ show
Dubai, UAE, 26 September 2013 – Marc Jessel, Country Director, UAE, British Council says educational ties between the UAE and the UK got a shot in the arm following the state visit of UAE President His Highness Sheikh Khalifa Bin Zayed Al Nahyan to the UK in May.
He said the visit was a major affirmation of the close relationship between the two countries. 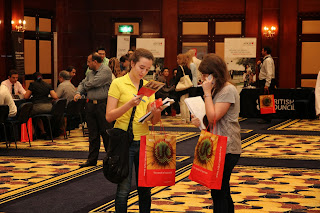 Mr. Jessel revealed that out of the 18,500 students from GCC studying in UK, 3,200 are from the UAE, which represents 19 percent of the total.
Mr. Jessel said that educational ties between the UAE and the UK have gone from strength to strength over the past few decades, with business management emerging as the No. 1 choice among students from the UAE going to the UK, followed by medicine and engineering.
Mr. Jessel was speaking yesterday evening (Wednesday, 25 September 2013) after inaugurating the Education UK Exhibition (EDUKEX) 2013 at the Dubai World Trade Centre.
The three-day event in Dubai and Abu Dhabi allowed students from across the UAE to interact with representatives from different UK universities and colleges to identify higher education opportunities in the UK.
Mr. Jessel said: “This exhibition is of great importance as it boosts the existing relations between UK and UAE in the field of education. The show offers a two-way communication channel between students living in the UAE and UK universities that are interested in attracting students with excellent educational background to study in the UK.”
Mr. Jessel said that the strong UAE-UK relations have been reflected in two state visits between both countries within a span of three years.
During the exhibition, which was organised by the British Council, visitors had the chance to interact with over 45 exhibitors.
British Council says the UAE remains one of the countries that widely follow UK courses and tests in schools and universities.
Mr Jessel said: “The UAE has huge trust in the UK system and a larger number of courses and tests are being brought to the country by UK firms.”
Students from the UAE are ideal candidates for UK universities as they are well educated through world class tools and are familiar with the UK system which allows them to cope with the course agenda faster and more effectively than their peers.