Skip to content
HBMeU presents employees with copies of Sheikh Mohammed’s ‘Flashes of Inspiration’ at opening of e-book club
[UAE, May 21, 2013] – Building on its position and efforts to set new standards for the provision of integrated and interactive learning platforms, Hamdan Bin Mohammed e-University (HBMeU) celebrated the launch of its new e-book club in a special ceremony recently held at its campus and attended by the university’s department heads, faculty members and staff. To commemorate the launching of the new initiative, HBMeU presented attendees with copies of the Arabic version of ‘Flashes of Inspiration,’ a book written by H.H. Sheikh Mohammed Bin Rashid Al Maktoum, Vice President and Prime Minister of the UAE and Ruler of Dubai. The token gesture reflects HBMeU’s eagerness to keep its academic and administrative staff informed and apprised of the vision and drive of the UAE’s leadership to forward academic excellence and improve the quality of education in the Arab world.
English speakers who were present during the launch were presented with copies of ‘My Vision,’ a book also written by H.H. Sheikh Mohammed that offers a detailed account of the vision that transformed Dubai and the UAE on the global economic map, based on knowledge economy and investment in human capital. According to HBMeU, the presentation of the books demonstrate the university’s continuing move to provide employees with comprehensive and integrated references that can be used to help drum up the march towards excellence and leadership—achieving new breakthroughs for learning and aid in the preparation of a generation of young people who are socially and academically qualified to lead the country to more growth and development.
Dr. Mansoor Al Awar, Chancellor, said, “HBMeU decided to celebrate the launch of ‘Flashes of Inspiration’ book by H.H. Sheikh Mohammed Bin Rashid Al Maktoum as it represents an intellectual platform and is regarded as a comprehensive reference and a major source of inspiration for today’s youth to further advance the ambitious goals of our wise leadership, aimed at achieving comprehensive development based primarily on building the human power capable of challenging the impossible, as well as enhancing the status of the UAE as one of the leading developed countries globally on all cultural, architectural, scientific, economic and social development levels.” 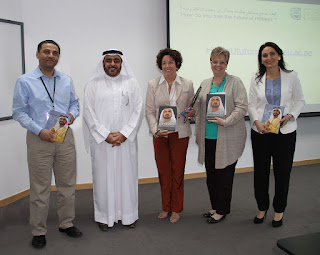 Al Awar added that the token presentation of ‘Flashes of Inspiration’ and ‘My Vision’ is in line with the university’s commitment to adhere and remain inspired by H.H. Sheikh Mohammed’s vision for leadership, management, excellence and future challenges. Al Awar also urged HBMeU’s academic and administrative staff to adopt an approach to excellence in terms of self and institutional development, which in turn, can help enhance the position of HBMeU as a leading University for e-learning in the Arab world and the first academic choice in the UAE and beyond.
“The e-book club initiative represents a massive addition that supports our constant endeavor to keep abreast of the latest developments in the world of modern technology and employ them optimally to transfer knowledge and establish a culture of excellence and quality management in the UAE and the rest of the Arab world,” said Al Awar.
The e-book club holds strategic importance as an exclusive initiative based on cutting-edge technologies and advanced interactive channels such as blogs, videos, and others. The club provides its Arabic and English-speaking members with the opportunity to review the latest scientific research, literary, monetary and educational releases, as well as exchange views and constructive ideas in an interactive environment that conforms to international best practices. Members must be active and participate effectively through comments, opinions or published materials. Membership to the e-book club will be cancelled automatically in the event of non-contribution for a period of three months.