Skip to content
The move is in line with directives of Sheikh Hamdan Bin Mohammed to sponsor younger talents
UAE, April 1, 2014 – The young Emirati inventor Adeeb Suleiman Al Balushi, recently visited the Emirates Institution for Advanced Science and Technology (EIAST) where he met a group of engineers and was elaborately introduced to the institute’s projects including DubaiSat-1, DubaiSat-2 and Khalifa Sat – the first satellite to be fully built and manufactured at the hands of 100% UAE engineers. This move follows the directives of H.H. Sheikh Hamdan Bin Mohammed Bin Rashid Al Maktoum, Crown Prince of Dubai, appointing EIAST to supervise the child’s scientific trip. 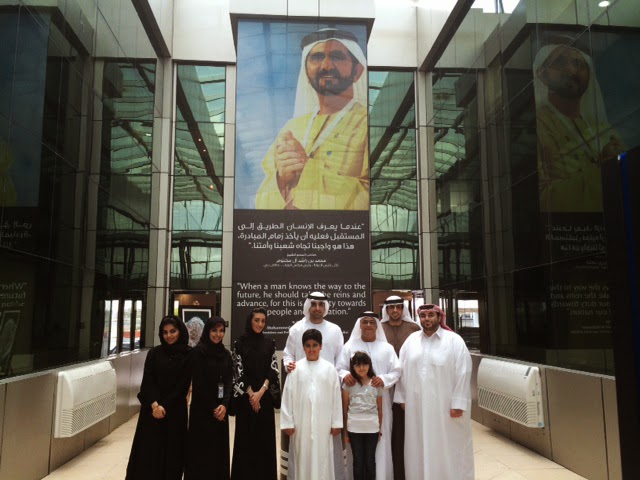 Known as the young Emirati inventor, Al Balushi toured around the institute and learned about the functioning of the ground station which is responsible for monitoring and operating the two satellites, DubaiSat-1 and DubaiSat-2. The wonder boy reaffirmed his commitment to continue to gain best scientific knowledge and technical expertise in order to help achieve better progress in the UAE. He further expressed his delight to have visited EIAST whose ongoing scientific achievements primarily aim to serve the community by creating a leading specialized facility that is able to position the country as a regional and global leader in space industry and improve its footprint in this vital area which helps shape the future.
H.E. Yousuf Al Shaibani, Director General, EIAST, said: “We appreciate the trust that H.H. Sheikh Hamdan Bin Mohammed Bin Rashid Al Maktoum has placed in EIAST. On par with the directives of His Highness, we will follow up with the scientific trip of Al Balushi, one of the youngest investors of the world. EIAST is committed to provide full support to national competences while catering to the current and potential needs and requirements in line with the aspirations of H.H. Sheikh Mohammed Bin Rashid Al Maktoum, Vice President and Prime Minister of the UAE and Ruler of Dubai, to position the country as an international hub for excellence by disseminating the culture of superiority and creativity and offering a proper environment that is able to achieve comprehensive sustainable development across the UAE.”
H.H. Sheikh Hamdan Bin Mohammed Bin Rashid Al Maktoum has ordered to organize a scientific trip for Adeeb Al Balushi across seven of the most advanced and developed countries in the area of science and research. His Highness also assigned EIAST to follow up and evaluate his progress on a regular basis in order to ensure that Al Balushi makes best of this trip.
The 10 year old Al Balushi is the youngest Arab scientist and among the youngest investors in the world. His first invention was a waterproof prosthetic limb to help his polio-affected father practice swimming and diving. Today, he holds 7 scientific patents and has been awarded many local, Arab and international certificates of appreciation and membership.
EIAST was established by the Dubai Government in 2006 with the goal of promoting a culture of advanced scientific research and technology innovation in Dubai and the UAE, and enhancing technology innovation and scientific skills among UAE Nationals. It is mainly involved in outer space research and development; satellite manufacturing and systems development; space imaging; and ground station services and support for other satellites. For more information about EIAST, please visit www.eiast.ae.
For latest news and developments on Khalifa Sat, please follow us on Instagram: http://instagram.com/khalifasat_project